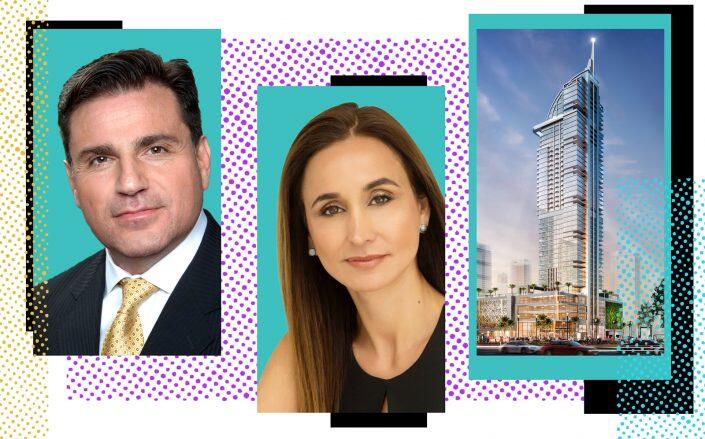 A yet-to-be-built nightclub-branded condo tower in an underdeveloped area north of downtown Miami is nearly sold out just months after quietly launching sales.

Blocks away, the developers of an as-yet-unbuilt condo tower at Miami Worldcenter bounced back after losing more than half their reservations as a result of the lockdown early on in the pandemic. It sold out by March.

It’s a feverish market in South Florida. Developers throughout the region are reporting a rush of sales on projects, including those launched years ago and those that began selling during the pandemic.

Prior to Covid and in the first few months of the pandemic, developers were singing a different tune, offering a number of incentives to agents and prospective buyers.

Now that the inventory of waterfront single-family homes has been absorbed — with prices reaching new highs in many South Florida cities and neighborhoods — and existing condo inventory has sold, builders and brokers are seeking to take advantage of high demand. New projects seem to be launching every month.

In May, Miami-Dade condo sales – excluding new development – rose by about 51 percent compared to May 2019, according to reports from the Miami Association of Realtors.

Miami is known for its boom and bust cycles, though many say it’s different this time around.

“Generally, Miami has been a community that has oftentimes built more inventory than it needs and has oftentimes found itself with [high] vacancy,” said Jeff Bartel, head of Miami-based Hamptons Group, an investment and strategic advisory firm. “That is not the case right now. Right now, construction is not keeping up with demand.”

“We thought we were toast”

Kodsi again tapped Peggy Olin’s OneWorld Properties to sell the Legacy condos. Presales were humming along until the pandemic reached Miami and the area went on lockdown. Buyers canceled 100 of the 170 reservations.

“We thought we were toast,” Olin said. Condo sales in existing buildings also came to halt, as many properties banned showings due to safety concerns.

Fast forward to now, and the project is fully presold with a $160 million condo sellout, Kodsi and Fucci told The Real Deal. Buyers have provided at least 20 percent deposits now that the units are in contract. Royal Palm plans to break ground soon and complete the building by the end of 2024. A rendering of Natiivo Miami

Prices ranged from $500,000 to more than $1 million, and the majority of buyers, many of whom purchased over Zoom, came from Latin America. About 30 percent are domestic.

Accor will manage and operate the mixed-use tower, which will include on the eighth floor a health and performance center with a medical practice, lab, pharmacy, diagnostic center and rooms with medical gas and ventilator capabilities – the latter of which became marketable during a pandemic, Kodsi said.

At the Trump Group’s Estates at Acqualina project, the south tower, which is expected to be delivered by the end of this year, is 98 percent sold, according to a spokesperson. One $31 million penthouse is left. The north tower, set to open next year, is 93 percent sold.

The Sunny Isles Beach Ritz-Carlton project, developed by Fortune International Group and Château Group, is nearly 90 percent sold with more than $650 million in sales volume, including the four penthouses, according to a spokesperson.

Fortune’s Edgardo Defortuna said sales aren’t slowing down. “The beauty is that these buyers” are “very real” and not investors, as seen in previous cycles, he said.

The 15 villas at the Miami Beach Ritz-Carlton development, a separate project that is not affiliated with the Sunny Isles tower, are 67 percent sold since launching in February, with more than $68 million in sales volume, according to a spokesperson. Five villas are unsold.

Andy Ashwal of GFI, which is building the villas, said the developer has raised prices since launching sales. All of the waterfront villas have been presold and those that are non-waterfront are selling at a “greater velocity than we anticipated,” Ashwal said. One villa recently sold to developer Steve Witkoff’s son, Zach.

Natiivo Miami, a short-term rental condo project in downtown Miami, is now more than 90 percent sold, according to a spokesperson. The development, led by Keith Menin, will have 448 condos and a 240-key Gale hotel.

Ali Cervera Paysse, sales director, said units at every price have been selling, from $350,000 to $1.2 million. “It’s all over the place,” she said. “There’s people looking for larger units, smaller units. There are end-users, second home buyers.”

Over on Fisher Island, where units sell for millions of dollars, PDS Development, led by Heinrich von Hanau, sold out Palazzo Del Sol after years on the market for a combined sales volume of $450 million. And its sister project, Palazzo Della Luna, is 83 percent sold with sales reaching nearly $400 million, said broker Dora Puig, who is leading sales of both buildings.

Palazzo Del Sol, a 43-unit condo building, took more than five years to sell out, while Della Luna is on track to sell all of its units at a much faster pace, Puig said. Palazzo Del Sol was completed in 2016.

She acknowledged that agents are reaping the benefits of the huge surge in business.

“Are we enjoying it? Yeah. Do we like that inventory is hard to come by? No,” she said.

The frenzy of people moving to Miami is fueled by the tax benefits, pro-business environment, and tech bros pumping up the city and its mayor. It has also led developers to embrace cryptocurrencies, including E11even Hotel & Residences in downtown Miami, which is about 95 percent presold after launching sales in February, and Arte in Surfside.

Generally speaking, developers will immediately convert whatever cryptocurrency a buyer pays into cash, they say.

At the boutique condo building Arte, developers Alex Sapir and Giovanni Fasciano recently sold a penthouse to a hidden buyer who paid $22.5 million in cryptocurrency. The deal marked the 10th sale at Arte, a 16-unit building. Sales were slow until late last year, with the pace quickening this year, records show. Only three units sold in 2020, two of which were to family members of Sapir.

Property Markets Group’s Kevin Maloney said he and E11even Partners decided to accept crypto for the project’s remaining units because buyers were requesting it.

“At E11even, we had an usually high demand of people asking for crypto,” Maloney said. PMG will offer the option to buyers of other projects across the country depending on how successful it is at E11even, he said.

After launching earlier this year, the developers expect to break ground in the third quarter. Though buyers can still back out, forgoing their 10 percent deposits, the project’s quick presales even surprised Maloney.

“It was a bit of a wild card,” he said. “The guys in my office really liked it. They were right, and it sold out.”

A RelatedISG Realty report from April, which tracks new development condo sales from Coconut Grove to Fort Lauderdale, found that 95 percent of the 19,471 units launched since 2012 have sold.

Even Related Group, Miami’s most prolific condo builder, sold all of its inventory from the previous cycle, Jon Paul Pérez, president of the firm, told TRD last month. That includes the nearly $1 billion sellout of the Residences by Armani/Casa in Sunny Isles, which it co-developed with Gil Dezer’s Dezer Development.

Some submarkets are outperforming others: in Brickell, 99 percent of units launched since 2012 have been sold, according to an updated report from RelatedISG.

Naysayers warn that prices will fall once demand dries up, and that developers are overbuilding. Plus, buyers can still walk away from contracts, especially if they are in the reservations phase. In many cases, they would be giving up deposits of at least 10 percent.

Peter Zalewski, a condo consultant, said the national economy is “not as strong as people are led to believe,” and cautions investors and developers to watch what happens once the national eviction moratorium is lifted.

Zalewski said the elimination of the moratorium is the biggest issue facing the industry, and it will suddenly create a major shift in the market.

“At the end of the day, the market comes down,” he said. “We already passed the point where it makes more sense to rent than buy.”

Read Via The Real Deal.